In October last year I wrote about the potential for better public transport in Stoke-on-Trent, built chiefly around the existing and abandoned railway lines threading the city. Some elements seem to be moving forwards, with Stoke MPs recently debating the reopening of the Stoke-Leek line in Parliament.

So what practicalities should be considered?

I developed this image, which was largely infrastructure based - showing the interplay of existing and proposed lines. Although Stoke should absolutely see significant public transport new-build (any similar sized German city will have an S-Bahn network), these highlight existing and under-utilised infrastructure which could be used as the core of such a network.

However, things are never quite that simple. For one thing, just because a line runs between two places does not mean end-to-end services are in demand - Origin-Destination analysis is important in laying down actual services. More practically, mainline rail platforms are higher than tram platforms and do not always support the level-boarding principles governing new tram networks - loading gauge is a gnarly problem. For new-build stations this need not be a problem but some extant stations such as Longton simply do not have the space to add a lower tram-compatible platform. In the case of the Sheffield Super-Tram, the tram-train stock uses Network Rail lines, but stops at dedicated tram platforms. It cannot integrate with rail infrastructure quite that seamlessly.

The upshot of this is that the network may well need to be operated in two parts - light-rail rolling stock would provide a high-frequency (what’s metro?) commuter rail or light rail service on the extant railway lines, with tram-train stock servicing the new build tramlines and Stoke-Leek line (I will work on the basis that stations on the Leek line will either be reinstated as tram compatible or indeed will be tram-only as there is no need for a high-density of heavy-rail stops. The only heavy rail on the Leek line is likely to be freight, along with heritage stock accessing the mainline. Any passenger rail service would run Leek-Stoke with no intermediate stops as these would be provided by the tram service).

With this separation of lines in mind, it then becomes obvious that there’s a limited value to building a tram from Hanley to Longton. The resource would likely be better spent creating a spur from the Leek line into Hanley either from Milton or along the Bucknall New Road, permitting a direct Leek-Hanley service for shoppers and workers in addition to the Leek-Stoke service. Hanley is a major O-D (Origin-Destination) point and it makes sense to offer more direct access rather than forcing riders to Stoke Central station on a stricter hub-spoke model. This also offers a much shorter route for Leek students attending the Cauldon Campus of Stoke-on-Trent College.

I also decided that BRT through Newcastle was nonsense. Keele University is a massive hub, and as anyone who has worked on the campus (or growing Science & Business Park) will know, traffic in term-time is a nightmare. A tram service alongside a ban on undergraduates parking on campus would significantly alleviate this issue, as well as making life much easier for visitors to get in from Stoke Station. Any German city with more than 250k people will have a significant S-Bahn. Stoke can easily justify this, we’re just rubbish at building infrastructure in the UK. This would need to be all new-build, but this is a sensible investment in the future, and a worthwhile extension of a network which is largely being cobbled together from existing infrastructure, leaving an extremely low overall network cost. The cost would also be shared between SoT City Council, NUL Council and Keele University.

All of this of course is being done blind with respect to both current and predicted O-D data, which would be a major component in planning service provision.

This leaves the following proposed services: 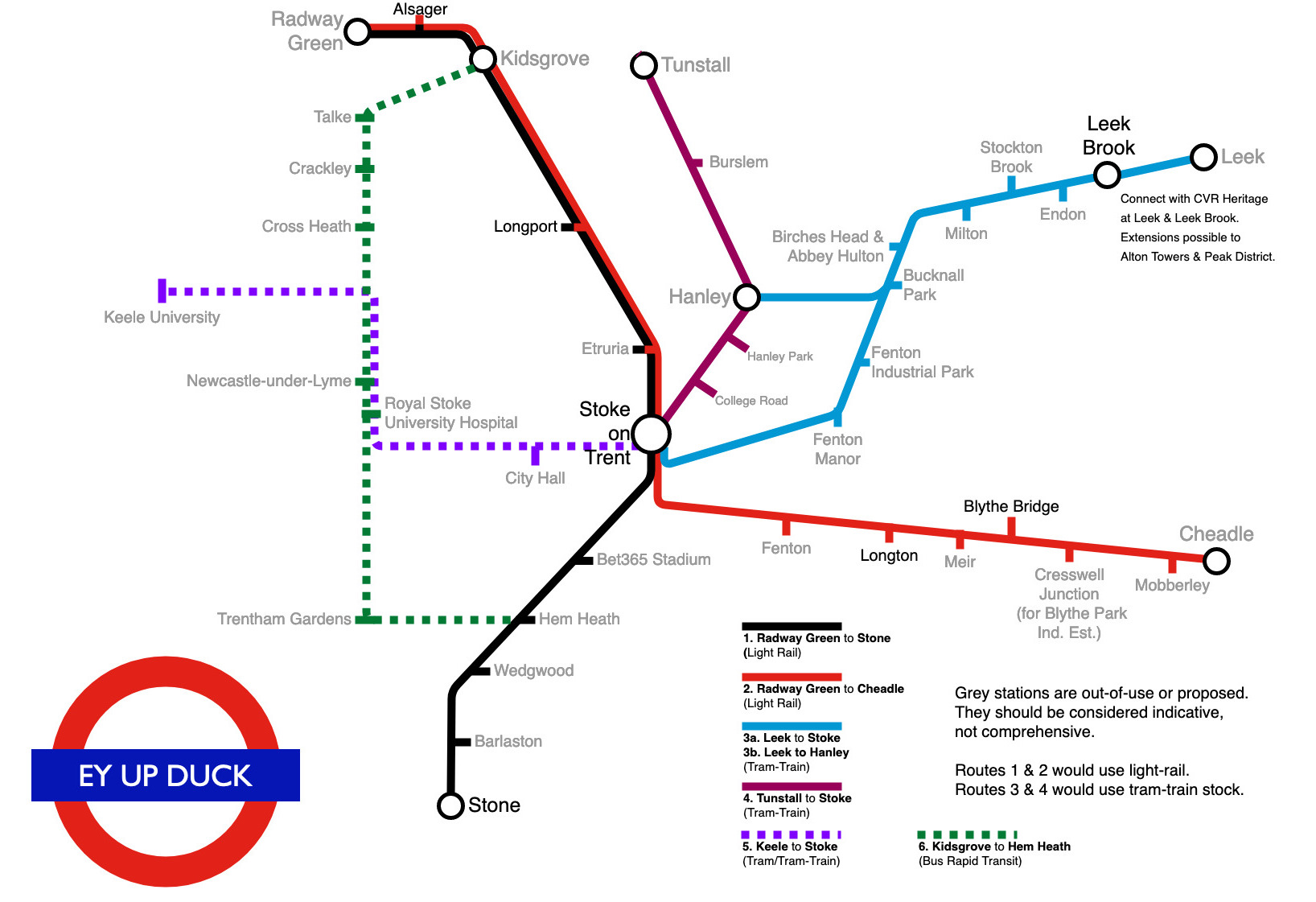 Route 1 provides a backbone service along the Stafford-Manchester line, spurring onto the Crewe line at Kidsgrove to service Alsager and the industrial sites at Radway Green. This is a relatively long-distance route, really providing commuter and light-rail service rather than dense urban tram-like service. Consequently this would use performant light rail stock (comparable performance envelope to the 140km/h DBAG Class 423/430s as used on German S-Bahns) which can serve normal rail platforms. There is a question there whether you could or should take it all the way to Crewe if you’re going as far as Radway. The value of driving a light-rail service into the busy Crewe hub would depend on other local rail offerings. The answer is probably not, as the Birmingham-Crewe and Derby-Crewe services already provide a couple of trains per hour which stop at Kidsgrove and Alsager in addition to Stoke-on-Trent. This regular (3-4tph) commuter service would run to Stone, stopping at multiple mothballed stations and providing match day services to the Bet365 Stadium.

The mainline originally supported four tracks for the huge freight traffic that used to transit the Potteries and could in principle be quadded again although pylons to support OLE (Overhead Line Equipment) may impinge in areas. This would separate the local service entirely from the mainline, but bottleneck at Stoke on Trent station which only has two platforms.

Route 2 would similarly use light-rail stock compatible with existing platforms. It meets and overlaps with Route 1 at Stoke-on-Trent station. Whether north Stoke needs such dense service would be dependent on O-D data. Depending on O-D data, it may be better to discontinue the heavy rail stops at Alsager and Kidsgrove in favour of light-rail service unless there is extensive travel to Crewe from those locations. Route 2 would then provide 3-4 trains per hour along the Derby line, spurring onto a rebuilt Cheadle line at Cresswell Junction. This service could be built out with the Cheadle terminus coming online as a Phase 2.

It may ultimately be the case that signalling and capacity limits through Stoke Station means Route 2 terminates there with northbound passengers changing onto Route 1 rather than having a continuous service. Provided that service frequency is good, changing will not incur much of an increase to journey times. Using lightweight and performant Class 399s, napkin maths projects a Blythe Bridge-Stoke Station journey time of 10.5minutes, which compares pretty well with the current (once-hourly) EMR service (11mins, only stopping once - at Longton), which uses much less performant diesel units.

Use of the quad-width corridor north of Stoke Station to create a dedicated “S-Bahn” line parallel to the mainline could be especially relevant here.

Route 3 is entirely dependent on the reopened (realistically: rebuilt) Stoke-Leek line. As Hanley is likely to be a major destination, a spur is proposed, offering two services from Leek - one to Hanley and one to Stoke station. Route 3 would use tram-train rolling stock and it is envisaged that the intermediate stations would be commissioned as tram stops rather than standard rail platforms as there is unlikely to be heavy-rail passenger traffic from Leek anyway. The line would be commissioned to heavy rail standards to support freight and movements from CVR heritage, but all passenger services would be via tram-train. This also ensures compatibility with the pure-tram network beyond Hanley.

Napkin-maths suggests that a direct service (using the 100km/h Class399 stock in Sheffield) could cover Leek-Stoke in ~11minutes, rising to 21.5mins with the 7 intermediate stops shown (assuming maximum performance between stations with no restrictions for bridges or other track features). With a capacity of over 200 passengers, this compares very favourably with driving (~30mins) or the bus (>50mins). Importantly there are no level crossings, which is unusual on a rural line and makes operations much easier.

Stoke City Council’s proposed tram network covers Tunstall to Stoke station via Hanley. Whilst this represents a pure-tram build, for simplicity of operations this would likely use the same tram-train stock serving on Route 3 (assume Class 399s or similar).

One way of operating the tram-train segment would be to imagine that all trams are actually Tunstall-Leek, with some trams going via Stoke-on-Trent station. In practice this may be what some individual trams actually do. However, since some segments are likely to be busier than others, it is probable that not all trains will do this. For instance, you may have 4tph going from Tunstall to Hanley, of which two will continue to Leek as Route 3 and two will turn back, offering a higher frequency service in and around the central Stoke and Hanley area. Please note that I’m a crayonist, not an operations bod.

A new tram build will be somewhat expensive but a tram from the mainline station to a 10,000 student campus (via the teaching hospital and NUL city centre) is a no-brainer. This requires significant commitment from SoT City Council, NUL Council as well as other stakeholders like Keele University, particularly since a pure-tram build will not involve Network Rail, which leaves it to the Councils and possibly the DfT. This could operate whatever rolling stock you like, but simplicity would suggest using more Class 399s, which leaves you with just two models of stock - the light rail trains on routes 1&2, and the tram-compatible units on Routes 3, 4 & 5.

The most obvious place to start would be Route 1. The limited platform capacity and built-up surroundings of Stoke Station are a significant issue.

In the short term, SOT City Council should be having a very serious conversation with Network Rail about rebuilding stations at Meir and Fenton. The eastern leg of Route 2 could then be implemented very cheaply, potentially using some legacy DMUs until such a time as electrification is completed and EMUs can be sourced. Some switching would be required near Blythe Bridge for the trains to reverse direction (until such a time as a Cheadle extension is built). If a halt for Cresswell Junction were built, this would allow the S&C to be moved up the line which avoids complications with the level crossing immediately adjacent to Blythe Bridge station. Ultimately that level crossing will demand attention, both to facilitate electrification and because running a high-frequency service that closes the barriers every 10 minutes will cause a problem for local pedestrians and cyclists (okay, and motorists grumbles).

This on its own however is only a partially useful line. Students can commute faster into Stoke College and interconnects with other onward travel at Stoke station are no bad thing. Railways are a network however and implementing Route 2 from Longport or Stoke Station down to Blythe Bridge would be a useful commuter service but no more. To fully realise proper network effects it needs the Leek Line to make it worthwhile, which opens up Hanley and other significant destinations, encouraging broader modal shift to rail. The reinstatement is a big chunk of cash, but shared between Network Rail and SoT City Council, not so much as might be imagined.

The other question is where these proposals - which mostly amount to light and commuter rail - need to develop into higher-density services. But notions of full rapid-transit are perhaps premature. Let’s get some sensible commuter rail going first.

Newer
Website Categorisation Older
What do Scunthorpe, Clitheroe and Penistone have in common?